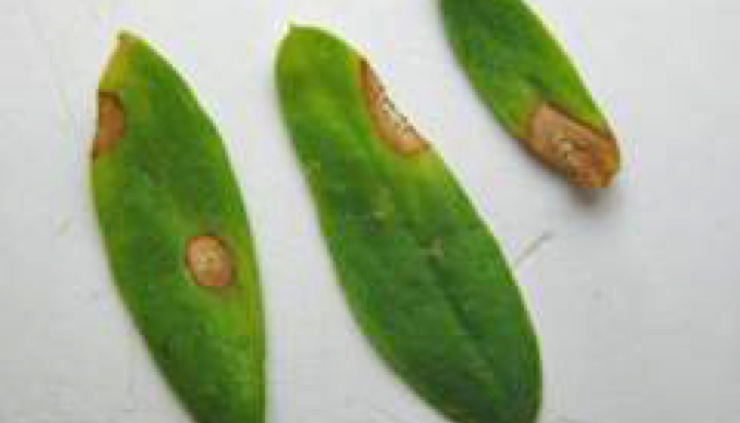 Thankfully, the rains have come to soothe our parched lands and breathe new life into our thirsty crops. But as soils become wetter, conditions for the growth of moisture-loving organisms such as fungi become more favourable.

The fungus kingdom is a large and diverse one and includes beneficial species such as those that help in organic matter decomposition and nutrient cycling, as well as disease-causing organisms. In fact, most plant diseases (some estimates put it at around 85%) are caused by fungal or fungal-like organisms. Some of the world’s most devastating famines were brought on by these organisms. For example, the potato blight of Ireland and northern Europe in the 1840s which killed around 1 million people and led to mass migration was caused by a fungal-like organism aptly named Phytophthora (plant destroyer). Some other familiar ones are those that cause diseases such as ascochyta blight (pictured below), anthracnose, downy mildews, powdery mildews, aphanomyces root rot, Fusarium blight, Rhizoctonia and Sclerotinia rots, etc. Typically, the risk of disease increases with moist conditions and high relative humidity, so growers should be on guard when these conditions are prevalent. So how should we be on guard? Like in boxing, it is not necessarily the hardest punch that knocks you out, it’s the one you did not see coming. So, regular scouting for diseases is absolutely critical. Scouting your fields regularly from crop emergence to maturity allows you to catch disease incidence before it spreads. However, infected plants may take several days before showing visible symptoms, so deciding to take action based on the prevalence of favourable conditions for disease is wise. Fortunately, modern science has given us the tools and knowledge to battle fungal diseases better than farmers could during the Great Famine of the 1840s. Crop rotation, use of disease-free seed, seed treatments, resistant varieties, and application of fungicides can help in controlling these diseases. An integrated approach to disease control is encouraged.

Note that many fungicides are not curative and are only beneficial if applied before infection takes place so spraying before plants are infected is key. Ultimately, spray decisions have to be made based on individual field conditions and economics. Also remember that using multiple modes of action is essential in preventing resistance. Be sure to talk to your SynergyAG rep about disease scouting and suitable products.

Contact Us
Tapping into the benefits of tissue testing

Fear no Weevil: 4 Things to Know About the Cabbage Seedpod Weevil Scroll to top