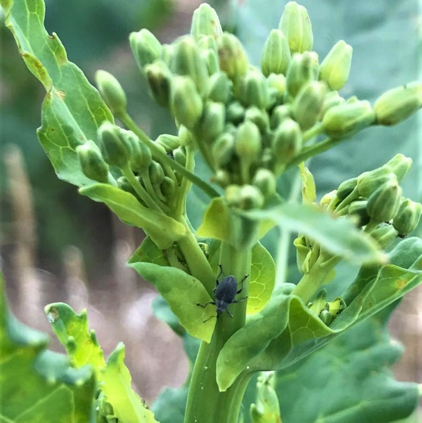 The cabbage seedpod weevil (CSW) has been known as a crop pest since the beginning of the 19th century. But it was in 1931 that it was first recorded in North America – in British Columbia. From there it is believed to have moved south and east, and is now found throughout much of the United States. It was detected in southern Alberta in 1995 and since then has continued to disperse through the Prairies (2018 survey below). Adult CSW are gray, about 3 mm long, with a pronounced snout (pictures below). They overwinter beneath leaf litter where they burrow into the soil surface and are protected from low temperatures. In spring, they emerge from their overwintering habitats to search for host plants and feed on floral buds, seeds, nectar and racemes. Females lay eggs into developing pods which later hatch into larvae. Most crop damage happens when larvae feed within developing pods. Each larva can consume 3 to 6 seeds. But further yield loss can result when larvae create exit holes, which makes pods more susceptible to shattering. The feeding punctures and larval exit holes can also serve as entry points for other small insects and pathogens. Larvae drop from exit holes and pupate in the soil. The new generation adults emerge 9-30 days after exit from the pods depending on temperature. The key to protecting yield is to prevent adult CSW from laying eggs in newly formed pods. Regular monitoring of fields is vital. Populations can be monitored by taking sweep net samples (180-degree sweeps) beginning from when the crop first enters the bud stage and continuing through the flowering period. Chemical control is recommended when an average of two to four adult weevils are collected per sweep.

The cabbage seedpod weevil plays dead when disturbed. But don’t let that fool you. They’ll rise up after a few seconds to resume their destructive activities. Be sure to talk with your local SynergyAG rep about how to control this and other insect pests.

We pride ourselves on providing hands-on customer service at
all six of our convenient locations. Get in touch with us and we would be happy to answer any questions you have.

Contact Us
Spore of the moment – Being prepared for fungal and fungal-like disea...