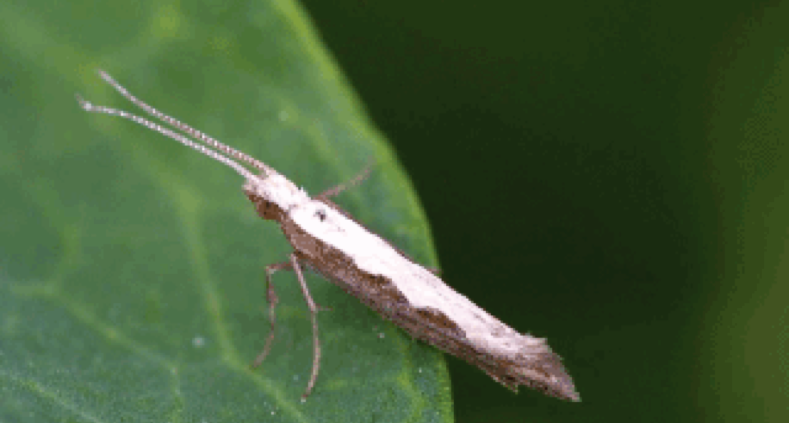 The diamondback moth has the creepy reputation of being the most destructive insect pest of Brassica crops in various parts of the world. The insect attacks plants in the Brassicaceae family including canola, cabbage, mustard, broccoli, kale and cauliflower. It is estimated to cost the world economy US$4–5 billion annually and is particularly problematic in warm climates. In Canada, it does not overwinter well because of the long, cold winters, however, populations can be carried by strong winds from areas that allow year-round persistence (like southern United States and northern Mexico) into the Canadian Prairies in the spring. All stages of the insect can also arrive on contaminated seedlings.

The adult moth is gray and brown with a cream-colored band on its back that may be shaped like a diamond pattern when at rest (Figure 1). The insect is about 6 – 9 mm long, and has pronounced antennae. Adult females can lay an average of 160 eggs on leaf surfaces during their short life span of about 16 days. Eggs hatch after 4-8 days. Most crop damage is caused by the larval stage. The larvae are pale yellowish-green to green caterpillars about 12 mm long (Figure 2).  Larvae feed on leaves, buds, flowers, seedpods, and sometimes, the developing seeds. When disturbed, the diamondback moth larva will wriggle backward violently and may drop from the plant, suspended by a silken thread. After a few seconds, it climbs back onto the leaf to continue feeding. The Canola Council of Canada lists the following tips for best management:

Be sure to talk with your SynergyAG rep for your scouting and product needs.

Desiccation of Pulses Scroll to top