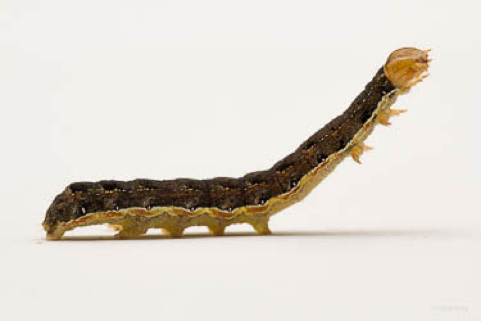 Bertha armyworm is one of the most destructive insect pests of crucifers in any year when there is a major outbreak. In Canada, it is found in Alberta, Saskatchewan, Manitoba, and some parts of British Columbia. Its preferred host plants include canola, rapeseed, mustard, and alfalfa, but it also attacks flax, peas and potato.

The adult stage is a grey-black moth with a silvery-whitish kidney-shaped marking on each forewing (picture below). A female moth can lay between 2,150 and 3500 eggs which hatch within a week. Newly hatched larvae are pale green and about 0.3 cm long but at maturity, larvae are about 4 cm long, with a light brown head and a yellowish-orange stripe along each side (picture below).  In late summer or early fall, larvae burrow into the ground where they survive the winter as pupae. Crop damage is caused by the larval stage. The degree of damage will vary with the crop, the crop’s growth stage, and the number and growth stage of larvae present. Most crop damage usually occurs within three weeks between late July and late August. Larvae feed on the same plant where eggs were laid, however, mature larvae can move across fields in search of food. Larvae chew irregularly-shaped holes in leaves and can also feed directly on seed pods and seeds causing further crop loss due to premature shattering.

Regular monitoring of bertha armyworm larvae (weekly from the beginning of July) is critical for early detection and to minimize crop losses. Research has found an average loss in yield of 0.058 bushels/acre for each larva/m2. Chemical control will be economical when larval populations are enough to potentially cause a yield loss greater than the cost of controlling them. This will take into consideration the cost of the insecticide, the method of application and the value of the crop. Ask your SynergyAG rep for help with monitoring and controlling bertha armyworm.

We pride ourselves on providing hands-on customer service at
all seven of our convenient locations. Get in touch with us and we would be happy to answer any questions you have.

What to Consider When Desiccating Canola