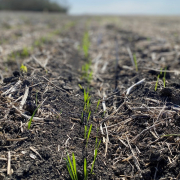 One of the funny things about speaking with an accent is that you can sometimes be misunderstood. For example, my Google Nest Mini may try to order pizza when I’m asking to call my friend Peter. That is not as bad as the guy who I heard was praying to be bold and suddenly lost his hair and went completely bald!

Plants can be misunderstood too. When a plant is deficient of any essential nutrient, it communicates through symptoms. But deficiency symptoms can be misdiagnosed leading to poor recommendations. For example, nitrogen and sulfur deficiencies can look alike in certain crops. Moreover, multiple deficiencies may occur at the same time on the same crop. Also, some environmental stresses can look like nutrient deficiencies. As crops begin to emerge across fields in Western Canada, you might notice growth differences in patches across the field. What do you do about it?

A first step in identifying a nutrient deficiency visually is noting where the symptom is showing up on the plant. Mobile nutrients (N, P, K, Cl, Mg, Mo) can move out of older leaves to younger leaves when the nutrient is in short supply. Therefore, visual symptoms of a mobile nutrient deficiency will first occur in the older or lower leaves. Immobile nutrients (B, Ca, Cu, Fe, Mn, Ni, S) do not generally move within the plant parts so deficiency symptoms will initially be seen in the younger or upper leaves. After this first diagnostic step, other characteristics (such as pattern and color) of the symptom can be used to identify the specific nutrient that is deficient, following some available guidelines. Visual diagnosis of plant nutrient deficiencies requires experience and is aided by knowledge of the field history.

But diagnosing nutrient deficiencies by visual observation alone is risky. That is because by the time visual symptoms appear, crop yield may have already been compromised. Plant tissue testing is a great way to identify plant nutrient deficiencies and determine appropriate corrective measures. A good tissue test can detect ‘hidden hunger’ before symptoms appear. Tissue testing and soil testing complement each other. While a soil test tells you how much of a nutrient is potentially available to your crop, plant tissue testing tells you how much of that potentially available nutrient is actually being taken up by the plant. Tissue testing is a useful activity to incorporate into your cropping program early in the season to ensure that deficiencies are caught in time, and yield is protected.